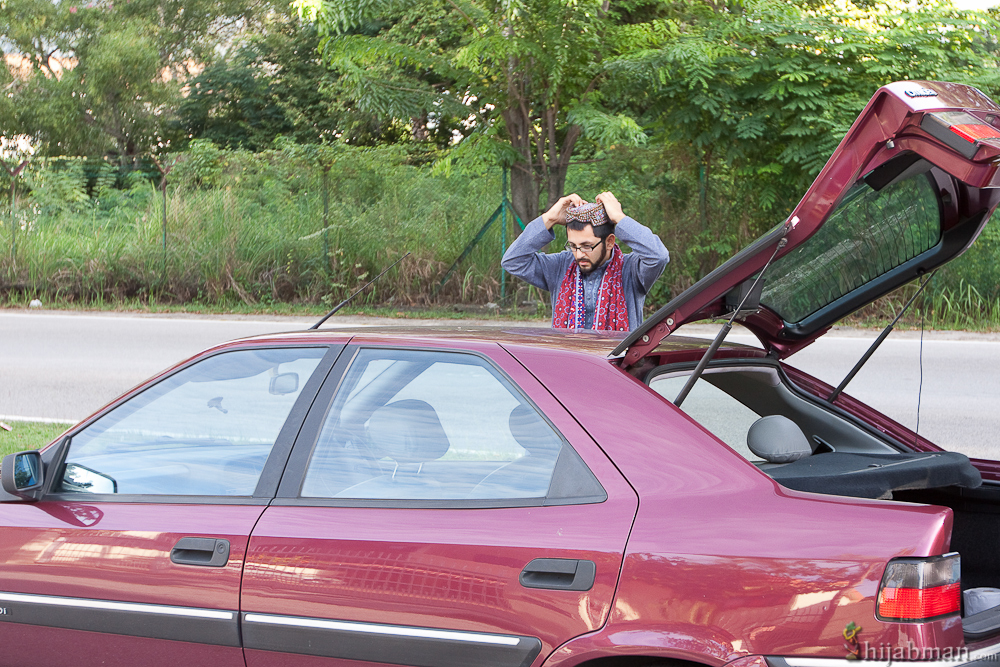 How I Met My Wife (And Daughter) Part 2

We left off just as I boarded a plane back to the U.S. in April of 2009. I had just stayed with EyeDot and her daughter WarriorPrincess for 3 days at the end of my Malaysian adventure. While there, EyeDot and I developed an interest in each other. Just seven days after I left, EyeDot launched a scheme to get me back in Southeast Asia. She suggested that she ask (read: she ordered) her younger brother to hire me to photograph his wedding in Penang two months later. You read that correctly. She, the eldest in the family, tried to get her family to fly me (the youngest in my family) across the world so we could have an excuse to get to know each other. Talk about ovarian fortitude!

Before I go on, let the record show that there are two sides to this story. EyeDot maintains that she did not strong-arm anyone into agreeing to hire me. The only [BIG, HUGE, GIGANTIC] thing that makes me doubt that is the fact that every single one of her siblings joke about how she has bossed them around since they were all kids. I'm embellishing just a little bit, but still...

"I ORDER you to remove those strong bully statements! -EyeDot, after reading my draft of this post."

I rest my case. And I'll rest on the couch, too, because that’s where I'll be sleeping tonight!

‍Eventually we nixed the idea that they should hire me for their wedding. Mixing Business + Personal life is a bad combination. Can you imagine?

‍“Hello possible future-in-laws! You just spent $2000 flying me across the world so I could photograph your son's wedding, but really, I'm just here to check out your daughter!”

‍Her mom was already having sleepless nights because all she knew was that I was younger than EyeDot, that I was Pakistani, and that my formal education ended with a Bachelor's Degree in the Social Sciences. In other words, I'm a walking nightmare.

In the end, we decided to split the cost of the ticket. Just like that?! You decided to fly across the world to see each other again? After less than a week of face-time?!

‍It sounds ridiculous, but EyeDot says she knew she wanted to marry me. I, on the other hand, checked in with my family to make sure I wasn't crazy. Their response? "God put this in your path. So, go explore. What's the worst that could happen? Surrender it!"

‍The two-and-a-half-months between my visits went by quickly, partly because EyeDot and I had almost-daily video chats over gmail. Oh, and also, I was freaking the &%^# out for the following reasons, all of which I shared with EyeDot:

1. My previous relationships had all been long distance. In fact, I called off my previous engagement with a woman I met in Argentina a month before the wedding date. Do I have some sort of weird international romance obsession?

‍2. My parents often say that they do not differentiate between their kids' spouses and their own kids, and it's true. I wanted that with my future wife's family. Maybe it was wishful thinking, but I didn't want to be treated like a son-in-law with all the formalities. I wanted to be treated like a son. Especially after the former engagement mentioned above, where I felt like a stranger in her parents' house.

3. EyeDot's appearance was 'conservative' and she told me her approach was 'haphazard.' While I understood where she was coming from, it did worry me. I spent my whole post-pubescent life formulating an approach to God and islam that I could live, and strive to live consistently. A haphazard approach to islam could be haphazard left-leaning, haphazard right-leaning, or haphazard crazy. That's precisely the reason I called off the engagement I mentioned above-- it turned out to be haphazard crazy (in my opinion).

Her response to this humbled me, and I apologized as soon as I received it:

"We should talk more about what is meant by 'Eyedot's more conservative'. We can dissect it more if you want. It'll help me define myself too. It's a box, right? And I don't think I fit in that box. But some of my behavior might mean 'conservative'. What does it mean to be conservative? In terms of: approach (well I think we established that it's more 'haphazard')? Social outlook? Ambition? Family roles? Social roles? Etc…"

Instead, we started discussing various issues rather than hiding behind labels. I also began letting her in on some baggage I had...

"EyeDot, I know this isn't any of my business, and what you wear is completely up to you. I also understand that this is illogical, but it is my baggage. Okay, here goes: I can't imagine my wife covering her hair."

I was expecting her to flip out, but she was completely level-headed. She just asked, "Why?" I told her that in my experience, the belief that hijab was mandatory pointed to a certain approach that was incompatible with my own. Then, I quoted the books of others, including a chapter from "And God Knows the Soldiers: The Authoritative and Authoritarian in Islamic Discourses" titled "Lecherous Suspicions: Do You Dare Question The Hijab?" I even talked about how I simply like the idea of seeing my wife's hair flow in the breeze!

‍"I find your approach attractive and simple, but I cannot promise that I will adopt it."

‍That's when I figured it out. All of my life, people have scoffed at my ideas. People, including potential partners, have said I was crazy. Women worried about my earning potential, chided me for not abiding by stereotypical gender roles. Here was a woman finally telling me that she found my ideas to be a legitimate path. A legitimate way of approaching God. A legitimate way of living life.

She accepted me. That's what makes me want to laugh joyfully almost every day now that we're married. She showed me, and now all of you, what one can do in the face of conflict in a relationship. She initiated the "agree to disagree," and added some sugar on top by accepting my ideas as just as valid as hers. Forget Geico and car insurance, my wife just saved you hundreds of dollars (or more!) in couple's therapy!

‍A couple weeks before my trip, my anxiety level dropped significantly, but I was still holding my breath, since I hadn't met her family. Maybe God gave me the clarity I asked for. Maybe it was my family's support- there were no voiced concerns about her divorce or her child. Maybe it's just how I switch to survival-mode when I travel

Or maybe, I knew what was about to happen...Stay tuned for part 3.