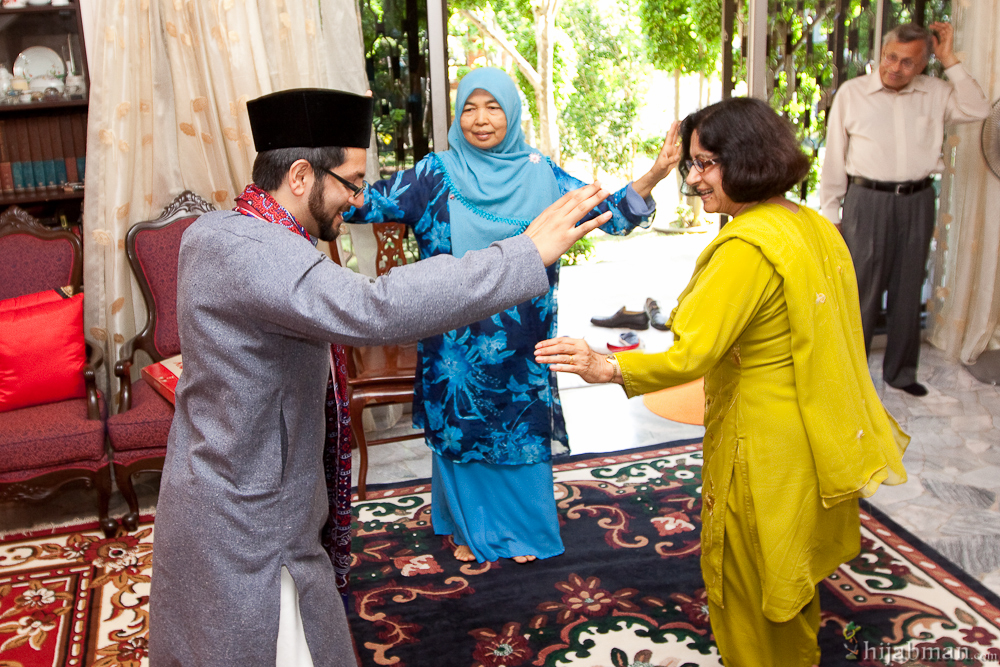 Question: How do two fairly practicing Muslims with limited financial means make an informed decision about marrying each other when they live on opposite sides of the world?

‍Answer: They live together for a month. Was that the collective bunching of a billion Muslims' panties I just heard?

‍What we did is not for everyone. Our situation was extraordinary. This is where traditional approaches to courting fail.

‍The fact that we were going to be in the same physical space didn't seem to bother us. For us, it was just a necessary part of our relationship. There was no way that EyeDot could evaluate me as a husband and a father unless we were in the same space. Just as there was no way that I could evaluate myself as a husband and a father from across the world. I've always said that one of the most important things you can do when evaluating yourself and someone else for marriage is observing them in a variety of different scenarios. Living in the same physical space was our ticket to deciding if we were compatible within a short period of time.

With that in mind, I flew back to Singapore to stay with EyeDot, her daughter WarriorPrincess, and AnnaDash, one of EyeDot's friends that was visiting. And... it was like we were flatmates. I cleaned the house, did the occasional load of laundry, or explored Singapore while EyeDot went off to work. Many women will tell you to judge a man by his actions and not his words. I agree, and would say the same of women. Within a few short days, I knew EyeDot was comfortable discussing and implementing different approaches to parenting. I also knew how organized she was and what her particular quirks were.

For example, after I washed the dishes one evening, I found that she had gone back and rearranged them in the drying rack. We all have certain things we like done a certain way. Since I didn't particularly care what way the dishes were arranged, I tried as best as I could to mimic her method. In the evenings, EyeDot and I supplemented our living together by going through a book suggested by Purvis, The Hard Questions by Susan Piver. I mentioned earlier how Muslim Marriage Guides fail. Piver's non-denominational book asks questions without assumptions on who we were as people.Here are a couple of excerpts from the introduction,

"It is not a matter of always being sweet and nice. It means being radically honest, with ourselves, with each other, with life, forever, in every moment, and dealing together with the emotions that may arise, be they love, hate, boredom, jealousy, ecstasy, apathy or any combination thereof -- without leaving."
"The moment I say, you are wrong, and I am right,' the dialog between us is dead. It is key to continually express your own feelings without making pronouncements about your partner's feelings, needs and desires. 'When you say that 30,000 is an adequate income for our family, I feel scared of living in poverty' is quite different from '30,000 will never be enough for the life i want to live.' The former invites intimacy and dialog the latter is an ultimatum..."

You would think that between living in the same space and answering a book full of questions ranging from finances to sex would be enough, but we also asked our mutual acquaintances for character references. My favorite response to EyeDot's request for a reference was by an old friend of mine, Priya. Beyond mentioning my general good character, she listed, without judgment, a few areas that EyeDot might want to explore further. To summarize, Priya mentioned my unconventional view on religion, the maturity level necessary to take on both a wife and a child, my nomadic lifestyle, and the fact that I have a large number of close female friends.

Since EyeDot and I had already discussed all of these issues, it was comforting to know that we were communicating openly. As far as my relationship with WarriorPrincess was concerned, I was UncleHijabMan, a willing playmate. When she got out of hand, however, I would stand next to EyeDot while she laid down the law. At first, it was clear that WarriorPrincess thought I was a traitor. Later, after she accepted my presence, I imagined her thoughts:

‍On one hand, he plays with me, on the other hand, he takes Mommy's side when I misbehave. What a peculiar fellow!

‍While we all played together, EyeDot was video-recording the interactions between WarriorPrincess and I. What I didn't realize was that she was also sending those videos to her family! Her purpose? To humanize me. Genius. Pure genius.

‍What she may not have realized was that it also showed me how conscious she is of the way others feel and how they would like to feel. After three weeks, we all flew to Penang, where I met her whole family. Since the house was packed for the first few days of our trip, EyeDot's father arranged some other sleeping arrangements for me. Before I left for the night, WarriorPrincess gave me a hug and I heard someone gasp. It was EyeDot's youngest sister. WarriorPrincess was known to be a handful, and for the little one to give me a hug without a fuss was astonishing to some.

‍The family was quiet but laid back for the most part. When I say laid back, I mean each member of the family would literally sprawl out on the floor of their family room. They all did their own thing, whether it be reading the paper, watching television, or just relaxing. It reminded me of my own family except much more quiet.

‍This was the last piece of the puzzle in my head. I had found a family in which I would feel at home in.

There was no need for formalities. But what did they think of me?‍

‍Along with meeting EyeDot's family, we also drove to Kuala Lumpur to visit some of EyeDot's friends.  Auntie Amina, who recently started blogging, also happened to be in town, so we met up for fruit smoothies.  Again, all of this served a dual purpose.  EyeDot and I got to see our friends, and that was just as important as checking each other out in within different social circles.  Besides, it never hurts to get the blessing of a Qur'anic scholar!

Then, on our last night in Malaysia, we went out to eat tandoori chicken with her parents.  I tried to engage her parents in conversation during dinner, but I only got one-word answers in response. It was only after dinner, when our fingers were stained orange from the tandoori spices, that EyeDot's mother finally spoke up, and asked the question that was probably on her mind all week.

‍"So, what are your plans?"

‍At that very moment, WarriorPrincess had a tantrum and EyeDot left the table to take care of her. There I was. Alone. Across from her mother.

"Well, Auntie," I looked her in the eyes, "God willing, with your permission, I'd like to marry EyeDot within a year."

I don't know where the heck that came from, or who put such beautiful words in my mouth, but take notes!

2. Her mom's Supreme Authority Over Me. (Permission)

3. Marriage (The only legitimate structure)

‍SO WHAT DID SHE SAY HIJABMAN?!

‍Just one word. with a slight smirk on her face: